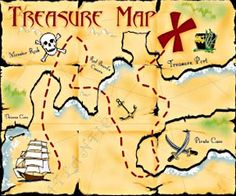 The essential elements of any good pirate story include a ship, one-eyed pirate, wooden leg, marauding crew, squawking parrot, buried treasure and a map. Using the map, the pirates set out to find the buried treasure which more often than not is buried on some deserted island beneath a spot marked X. The cartographic brilliance of the map didn’t matter so long as the pirates could find the spot marked X.

By their very nature maps represent only a small percentage of the available information, a relevant record for future reference. Our pirate’s map would probably feature only a few prominent landmarks such as dangerous reefs, a safe landing area, a few hills and watercourses and some form of local reference for the spot marked X. It might even include a set of instructions such as ‘locate the gnarly old tree and take 15 steps toward the hilltop that’s shaped like a hummock’. Any other information would be irrelevant.

The ‘map is not the territory’ is a maxim that is often used to express this concept of a map representing only information relevant to its purpose. If the map were indeed the territory then it would no longer be a map.

There are many similarities between the use of a pirate map to find the spot marked X and the use of maps to navigate through our daily lives. And instead of buried treasure, our quests might include traveling to work, facilitating a meeting, making breakfast, catching up with friends, playing sport or simply reading and relaxing.

Rather than maps based on geographic and physical features our human maps are based on feelings, emotions, memories, values, thoughts, learnt behaviours, and other intrinsic human elements. They represent the sum of our experiences.

Within our human map we have an immense array of neurological pathways created during episodes of learning. As we repeat the learning we strengthen these pathway and form habits, or patterns of behaviour.

An analogy is rain falling onto a hilly landscape. Once raindrops hit the earth’s surface they start their downward journey toward the lowest point in the landscape. If no watercourse exists it soon creates one. In the same way we process incoming information through the ‘watercourses’ of our nervous system. Entrenched behaviours would represent quite deep watercourses … what we often refer to as being ‘stuck in a rut’.

Our neural pathways are like gullies in the landscape, in that both are reinforced with use – one by the flow of water and the other by neural activity. Entrenched behaviours are the deep ‘neural watercourses’ … what we sometimes call ‘being in a rut’.

Increasing choice in how we behave

This concept of patterns has many labels which includes paradigms, frames of reference, habits, mindsets and modus operandi. Whatever the label, they determine how we view the world, what values we place on situations, and influence how we think and behave. They can also occur at a social level as they influence cultural beliefs, social norms, laws and policies.

Whatever their label our patterns of behaviour become repetitive which is why companies spend so much time collecting and analyzing data on what we get up to. By combining this data and with our repetitive natures they can predict with reasonable accuracy where to best place their next product or service.

A key reason we continue with repetitive patterns of behaviour is because once ‘learnt’ these patterns are relegated to our subconscious in an effort to make life easier and free up our conscious mind for ‘mindful’ thinking. If it didn’t then even the simple process of getting dressed would take an excruciating period of time if you had to ‘think’ through every step.

Within an organisational context these ‘subconscious behaviours’ take the form of policies, procedures, rules and regulations.

Within the disruptive world in which we live an established set of patterns is not going to sustain us in business. We need to be prepared to build and / or engage with other patterns. True masters have a lifelong commitment to learning – and this learning is a reflection of continually seeking to build and extend their repertoire of patterns

True Masters have a lifelong commitment to learning. (credit: illustration by Andrew Hore)

Because our patterns provide us with security and comfort, we need to be prepared to feel uncomfortable and experience tension when seeking to stretch and build such a repertoire. What I call nudging our comfort zones so as to explore the learning that takes place in the stretch zone. This feeling of discomfort applies to both individuals as well as organisations.

Being resourceful … building repertoire and talents

I believe we do not need to break patterns or habits, even though this is often promoted as the way to build capacity. Rather I’d advocate distorting, bending, suspending, going around, or just superseding them.
I believe it is more about developing alternative patterns that receive priority in how we behave within an identified context, and by so doing build on the patterns we already have. It is not so much the pattern that is at fault but how we use a certain pattern within a defined context. An ‘inappropriate’ or ‘ineffective’ pattern might become truly remarkable in another context.

The ability to generate new patterns, new perspectives, new opportunities is only going to become more and more relevant and significantly important in today’s changing world. With new maps and new pathways we can navigate to new shores and discover even more of the talent we have as humans. There are so many spots marked X and so much treasure awaiting the journey we can take as humans.